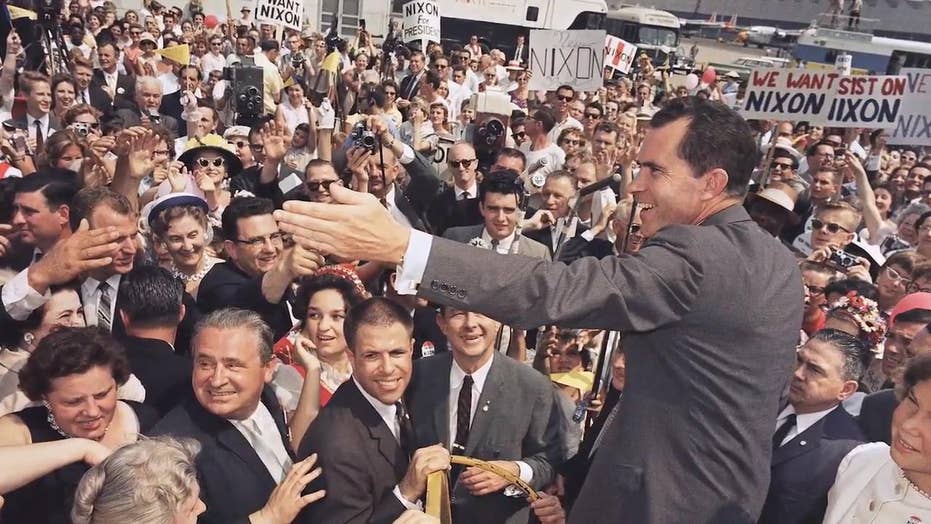 In the run-up to the House Judiciary Committee's Friday vote to advance the impeachment process against President Donald Trump, Democratic party leaders frequently and unfavorably compared Trump to President Richard Nixon. Fox Nation's soon-to-be-released series "Fox Nation 101: Impeachment" shows that there is a glaring difference between the two efforts.

"Without a doubt, the impeachment investigation of Richard Nixon is the most consequential that has ever happened in American history, if only because it's the only one that ultimately resulted in the resignation of the president and his removal from office and replacement with the vice president of the United States," said George Washington Law School Professor Paul Rosenzweig in an exclusive clip of the new five-part series, which will be released in full on Fox Nation on Monday, Dec. 16.

Rosenzweig observed that President Nixon became acutely aware that he had lost the support of his own party, after it was revealed in Nixon's own secretly-recorded Oval Office recordings that he had been involved in a cover-up of the 1972 break-in of the Democratic National Committee headquarters in the Watergate Office Building in Washington, D.C.

"He lost all political support in the House and Senate," said Rosenweig, who was also senior counsel to Kenneth Starr in the Whitewater investigation during the Clinton administration. "A bunch of Republican leaders visited him one night to tell him that if he actually didn't resign, he would almost certainly be impeached and almost certainly would be convicted and removed from office."

In contrast, the House Judiciary Committee vote on Friday was strictly partisan. The 23 Democrats on the committee voted to send two articles of impeachment to the full House.  Seventeen Republicans voted against it, and one Democrat, Rep. Ted Lieu D-Calif., did not vote because he has been out all week due to a medical procedure.

In fact, all Republicans in Congress are expected to vote in support of Trump, as are a certain number of Democrats. House leaders are reportedly expected to lose as many as a half-dozen votes from moderate Democrats representing swing districts or those that backed President Trump in 2016, when the full House votes on impeachment next week.

The party-line Judiciary committee vote and the apparent reservations of some of House Speaker Nancy Pelosi's own members stand in stark contrast to Pelosi's remarks from November, during which she suggested that Trump should follow Nixon's lead and resign his office.

WHO WAS THE FIRST PRESIDENT TO BE IMPEACHMENT?: NEW DOCUMENTARY

"I mean, what the president did was so much worse than even what Richard Nixon did, that at some point Richard Nixon cared about the country enough to recognize that this could not continue,” Pelosi said on CBS’ "Face the Nation" in November.

Rosenweig concluded in the Fox Nation series: "[Nixon] resigned because of the political turmoil that engulfed him when his true acts became known more generally.

"The final decisions about what happens are avowedly political and derive from Congress, the feelings of the American public and in the end, the sensibilities of the president of the United States."

The full 5-part series of "Fox Nation 101: Impeachment," which details the law, policy, and history of impeachment in America will be available in full on Fox Nation on Monday, December 16.

Fox Nation programs are viewable on-demand and from your mobile device app, but only available only for Fox Nation subscribers. Go to Fox Nation to start a free trial and watch the extensive library from Tomi Lahren, Pete Hegseth, Abby Hornacek, Laura Ingraham, Greg Gutfeld, Judge Andrew Napolitano and many more of your favorite Fox News personalities.