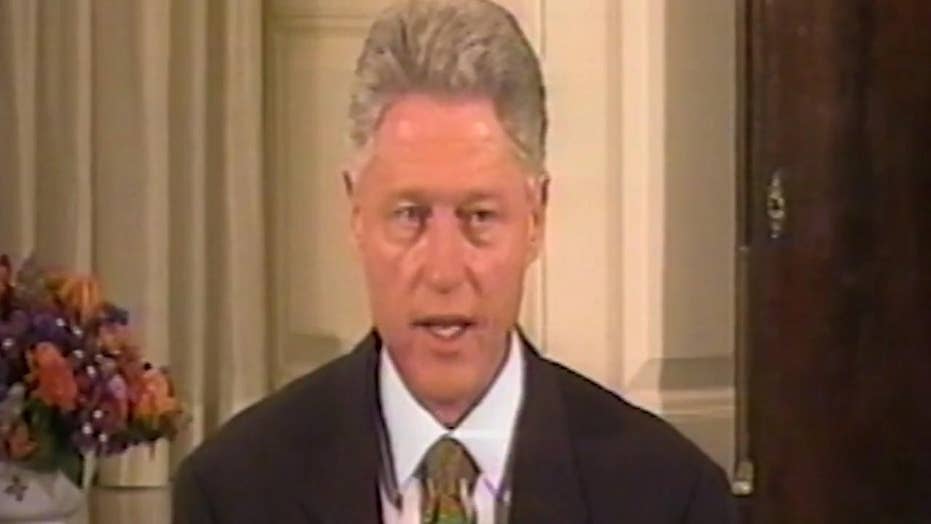 Fox News senior judicial analyst Judge Andrew Napolitano warned that Americans may want to brace themselves for another stormy stretch, similar to the years leading to the impeachment of former President Bill Clinton, as Democrats pushed ahead with a formal impeachment inquiry of President Donald Trump.

In the Fox Nation's "How to Impeach a President," Judge Napolitano delved into the work of the Office of Independent Counsel, as they compiled the historic "Starr report", laying out grounds for Clinton's eventual impeachment in the House in 1998 and his acquittal in the Senate in 1999.

PELOSI IN 1998 ON BILL CLINTON'S IMPEACHMENT: 'REPUBLICANS ARE PARALYZED WITH HATRED'

"Since January of 1998 the Office of Independent counsel, led by Ken Starr, had been investigating President Clinton on a litany of charges related to his affair with White House intern, Monica Lewinsky... the investigation veered off onto a different direction however when FBI agents learned that President Clinton was preparing to lie in a civil deposition in a sexual harassment case brought by an Arkansas woman named Paula Jones," he narrated.

In the Fox Nation piece, Judge Napolitano described how Clinton's alleged perjury, "would set off a tumultuous period of events not seen in America since the end of the Civil War -- the impeachment of the President of the United States."

The Judge told FoxNews.com that Americans should be ready for history to potentially repeat itself.

"The loyalty of the Trump supporters and the ferocity of his adversaries is unlike anything that I can recall and I have been a student of politics since Barry Goldwater challenged Lyndon Johnson in the presidential election of 1964. Part of this has to do with the President’s personality and his tendency to antagonize his opponents and part of it is that Democrats want Trump out of office because they feel they cannot defeat him at the polls," said the Judge.

Additionally, a formal impeachment inquiry into President Trump may not only force the country to revisit the turmoil of the late 90s, but according to the Judge, it may also lead to a rehash of more recent history -- the appointment of another special counsel.

"[I]f someone in the DOJ concludes that Trump committed a crime and if Attorney General Bill Barr was involved...[i]t could lead to the appointment of another special counsel," said the Judge, "Barr is mentioned in the transcript of the President’s call with the President of Ukraine, but we don’t know if Barr did anything to push Ukraine to investigate Biden’s son.  If Barr participated knowingly in this potential scheme of the President or if he was an unwitting dupe, who thought he was doing what is best for the country, it does not matter.  If he was involved in this that may be grounds to appoint a special counsel."

Yet, the appointment of a special counsel is not a prerequisite to a vote in the House to impeach the President.

"It is likely that the House will move to an impeachment vote against Trump without a special counsel, and if the vote passes the House then Trump loses his privileges as a president.  For instance, he cannot tell a White House counsel, as he did with [former White House counsel] Don McGahn, not to testify to Congress.  The court will not get involved because the House’s authority to impeach is almost without constitutional limit," the Judge explained.

In the end, a final vote to impeach a President is not a legal matter, as a former member of Ken Starr's team, associate Independent Counsel, Stephen Binhak told Fox Nation.

“The Constitutional allows for the impeachment of the President if the President engages in high crimes and misdemeanors.  The decision about whether to impeach is a purely political question, it’s not a legal one.  So the definition of what is a high crime and what is a misdemeanor is what the Representatives say it is when they draw up articles of impeachment and it is what the Senate decides it is when they decide whether to acquit or convict.”

To watch all of "How to Impeach a President" visit Fox Nation and join today.