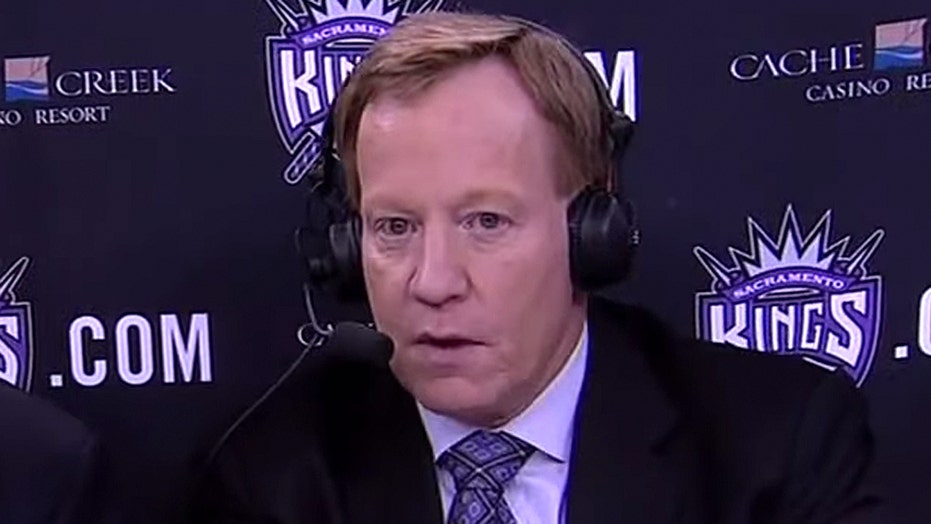 Sacramento Kings play-by-play announcer Grant Napear, who called games for the NBA team since 1988, resigned Tuesday following comments he made regarding the Black Lives Matter movement.

“Grant Napear has resigned from the Sacramento Kings,” the team said, according to The Sacramento Bee. “We thank him for his contributions to the team and wish him all the best.”

“I want to thank the fans for their overwhelming love and support,” Napear added in a statement. “I will always remain a part of Kings nation in my heart.”

On Sunday evening, Napear responded on Twitter to former Kings star DeMarcus Cousins, who asked him to comment on the Black Lives Matter movement in the wake of the May 25 death of George Floyd while in police custody.

"Hey!!!! How are you? Thought you forgot about me. Haven't heard from you in years. ALL LIVES MATTER...EVERY SINGLE ONE!!!," Napear responded.

The "Black Lives Matter" movement grew from concerns about police brutality in America, particularly against African-Americans and other minorities. Its supporters have frequently criticized the "All Lives Matter" reaction, saying it represents an attempt to obscure or invalidate the Black Lives Matter message.

Meanwhile, Bonneville Sacramento, operator of sports talk radio station KHTK, announced that it had "parted ways" with Napear, meaning the popular sports talk show he hosted would be ending as well. Napear had been placed on administrative leave before the relationship ended Tuesday, according to KHTK post on Twitter.

Following his original comments, Napear issued an apology to the Bee on Monday.

“I’m not as educated on BLM as I thought I was,” Napear said. “I had no idea that when I said ‘All Lives Matter’ that it was counter to what BLM was trying to get across.”

"If it came across as dumb I apologize. That was not my intent," Napear said. "That's how I was raised. It has been engrained in me since I can remember. I've been doing more listening than talking the past few days. I believe the past few days will change this country for the better!"

Napear reportedly got into some hot water earlier in his career when he defended disgraced former Los Angeles Clippers owner Donald Sterling and argued Sterling couldn’t be labeled a racist because he employed black people.

He also served a play-by-play announcer for the Oakland Raiders, Sacramento Mountain Lions and arena football's San Jose SaberCats throughout his career, according to the Bee. One of his famed catchphrases was “If you don’t like that, you don’t like NBA basketball.”

David Aaro is a Reporter at Fox News Digital based in New York City.